Opinion: IBADAN, Honour to the undeserving. By Wole Arisekola

International  flights into two major airports in Nigeria has been suspended.

With effect from Monday, the two international airports – Murtala Muhammed Airport Lagos and the Nnamdi Azikwe Airport, Abuja – will remain closed for all international flights, according to a statement Saturday by the Nigerian Civil Aviation Authority Director-General, Musa Nuhu.

Mr Nuhu said the move is in furtherance of measures to contain the rampaging coronavirus.

In the meantime, the federal government on Saturday announced 10 new cases of Covid-19 in Nigeria.

This brings the total number of confirmed cases in the country to 22.

According to a statement signed by the minister of Health, Osagie Ehanire, the new cases were confirmed in the Federal Capital Territory and Lagos State.

Mr Ehanire said of the ten new cases, three were confirmed in the Federal Capital Territory (FCT) and seven in Lagos State.

“This brings the total number of confirmed cases in Nigeria to 22,” he said.

Mr Ehanire also disclosed that all ten new cases are Nigerian nationals. Nine of them have travel history to Canada, France, Netherlands, Spain and the United Kingdom.

He said all the patients returned to the country in the past week.

Meanwhile, the 10th case, he said, is a close contact of a previously confirmed case.

This implies that Nigeria have recorded just one case of Covid-19 in a foreign national. However, most of the cases have been imported from Europe and the U.K.

@Fmohnigeria has confirmed 10 new cases of #COVID19 in #Nigeria

Of the 10 new cases, 3 are in the Federal Capital Territory and 7 are in Lagos

9 out of the 10 cases have travel history outside Nigeria in the last one week. The 10th case is a close contact of a confirmed case 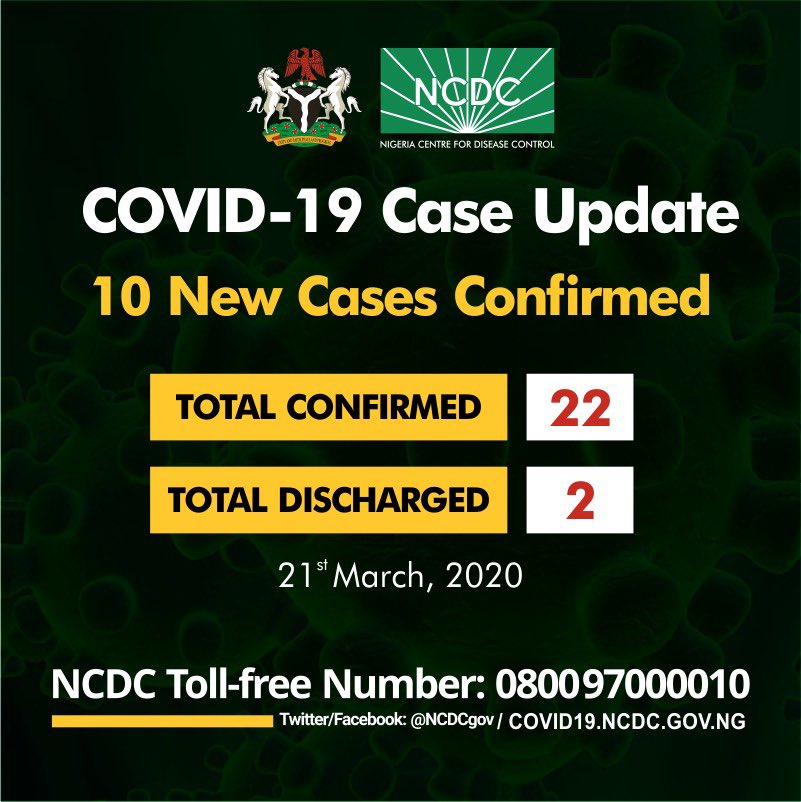 He said all 10 new cases have mild to moderate symptoms and are currently receiving treatment.

Mr Ehanire said the federal government remains committed to working with states to provide optimal care for all confirmed COVID-19 cases in the country.

As of March 21, 22 cases have been confirmed, with two of the cases discharged. There has been no death from COVID-19 in Nigeria.

So far, 19 cases were imported while three are contacts of people who came into the country. Nigeria is yet to report any local transmission.

Nigeria, as of Friday, had restricted travel from 15 countries with high coronavirus cases.

The travel restriction commenced on March 21.

The travel restrictions are expected to limit the number of imported cases into the country.

As the country records more cases from the ongoing COVID-19 outbreak, it has become imperative for the government to intensify contact tracing to identify those who might have been in contact with the confirmed cases.

As such, the minister said the Port Health Services has heightened screening at all air, land and sea points of entry into Nigeria and adapted the protocols to reflect the travel guidance issued by the Presidential Task Force on the Control of Coronavirus.

He said the National Emergency Operations Centre (EOC) led by the Nigeria Centre for Disease Control (NCDC) supported by partners will continue to coordinate response activities and strengthen preparedness capacity across states nationwide.

He said an intensive national risk communications campaign is also ongoing, to inform Nigerians about COVID-19.

Meanwhile, Nigerians are advised to avoid public gatherings, maintain good personal hygiene and visit the hospital when they fall ill.

Ex-Oyo Gov Ajimobi To Be Given State Burial Ceremony On Sunday, Details Announced